The Slow Ways website launched seven months ago. Since then David Sanderson has been slowly but surely clocking up miles – 500 of them – by walking and reviewing 100 Slow Ways routes. He actually completed his 100th route today by walking Greblo one between Great Wyrley and Bloxwich.

This is a truly inspiring effort and one that people could replicate from villages, towns and cities across Great Britain.

To celebrate his century of Slow Ways routes, I reached out to David with some questions. I wanted to find out what makes him tick, what he’s planning next and any tips he has for people who’d like to follow in his footsteps.

You can connect with David on Twitter here and see all the routes he’s walked on his Waylist of walked routes.

You’ve now walked over 500 miles of Slow Ways routes in your part of the UK. Why?

I got involved in Slow Ways because devising and walking routes were things I did for fun anyway. The idea that I could do this and contribute to a group project was marvellous. What’s driven me is a desire to wander the Slow Ways between decreasingly local settlements rather than to rack up mileage per se. I concentrate on the exploration and the distance looks after itself!

Can we see a map of all the routes you’ve walked?

That’s a big distance. Few people will have explored your area as well as you have done. What have you discovered about your part of the country?

Slow Ways has introduced me to Lichfield District in a way that nothing else has. Numerous villages whose names I knew but had no reason to visit are now places I know all the ways around. Across the West Midlands I’ve discovered some amazing green spaces in areas which tend to be written off by many walkers.

Can you send us a selfie?

What have you discovered about yourself while walking Slow Ways?

Despite it being quite a solitary start, as the project has progressed I’ve got to know other Slow Ways volunteers. I guess I’ve learned that although it’s been useful to enjoy my own company, I’m still by nature quite a social animal.

Which Slow Way would you recommend others to try? Why?

Alrswa three from Alrewas in Staffordshire to Swadlincote, Derbyshire. The well maintained route connects the West and East Midlands and has a variety of settings, including canal, open farmland, pretty villages and urban greenways. It’s also special because it’s the Slow Way furthest from the sea.

Do you have a photo from that Slow Way’s route?

This was taken on Alrswa three to the south east of Rosliston in Derbyshire.

This one doesn’t cut off the top of the tree!

I came across a road west of Swadlincote so unused that swans had nested in the middle of it. I had to inch my way past the family of five!

I saw two teenagers drag a payphone out of the canal in Walsall yesterday.

Walking under Spaghetti Junction is always an “otherworldly” joy.

500 miles and 100 Slow Ways is an incredible achievement. How much further do you plan to go!?

My aim in 2022 is to have walked Slow Ways from Brighton to New Brighton (Brighton to Wallasey and a short stroll to be precise). Like I said, it’s all about the exploration, the distance just kind of happens!

What advice would you give to someone who’s considering walking lots of their local Slow Ways?

Get an idea of your comfortable walking distance and try and combine Slow Ways to fit this, including triangular or circular routes.

Do the easiest ones to get to first. If you can start from home that’s even better. I managed eight Slow Ways before I had to make my first bus journeys. Have fun!

That really is it! 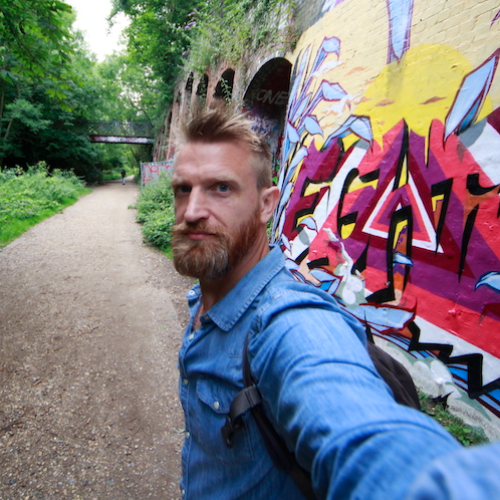 Walking for River: a journey from Ipswich to Bristol