The hack day where it all began

Seventy people came together to design an idea that would – hopefully – change the way people feel about the land beneath their feet. As with the best ideas, it started with people-power. Photographer Ben Darlington was there to capture it

A little over two years ago, just before covid split us all up, seventy people got together in Ordnance Survey’s innovation centre in London, drawn in to be part of a new idea. With their laptops, and using OS Maps, Google Streetview, and sometimes their own prior experience, they began to join up all of the towns and cities of Great Britain. Ben Darlington came along take photos, and tells us what it was that drew him to the idea, and where he hopes it will go.

“The motivation to photograph the hack day was purely selfish. It’s fascinating to watch people and what they’re going through as they do something. I like projects that are pushing at social change and are playing into the particular zeitgeist.

I shoot a lot of protests, principally Extinction Rebellion and Black Lives Matter, and what I find myself photographing is human beings and what they are experiencing when they are doing the protest. I stumbled into the big Extinction Rebellion protest in easter 2019, on my way somewhere else. I didn’t know why I was photographing it, but I spent four days on Waterloo Bridge.

I never bothered to go for a diagnosis but I’m probably Asperger’s or sort-of leaning in that direction, and the great thing about a camera is that it lets you take part without having to be part of it. It’s something you have to do on your own, and people realise that.

The original reason for going along to the hack day was that I’d been doing some coding work for a travel organisation that was playing with the idea of distance. They’d realised that everybody describes ‘how far’ in terms of time: two hours or three hours to get there or whatever. It was a really interesting notion, that distance has gone as a geographic measurement and it’s being replaced with a temporal, a time-based measurement. And that’s exciting in relation to Slow Ways. Yes, there is the social bit of the project – pushing back against the fast life, jet travel and whatever. But actually this time/distance thing is deeper than that.

Seeing something deeper in Slow Ways

I was also really interested in seeing the sort of people who were there, giving up their time. I expected to see a few people in the ‘like me’ camp, my sort of age going along because it’s something to do on Saturday afternoon. But I wondered who else I’d find.

There were a lot of intelligent people, probably all there for the same reason I was, which is that it is rewarding to be involved in something that is different and interesting. But it wasn’t just novelty.

You do have to look at the Slow Ways idea and ask why it is any better than just using the Ordnance Survey app, and choosing footpath A, B and C. I think there is a deeper, bigger, much more interesting thing that Slow Ways is doing. And it’s not just the time/distance thing. It’s the challenge of ‘why are you walking?’ It’s the notion of mindful walking, I suspect, the experience of doing it. And the question of what pilgrimage means in the 21st century? And if you stay with the idea of time, does it matter if a pilgrimage lasts a minute or a year? Is it fundamentally the same thing that you’re doing? I think Slow Ways is in that space.

Most of the route reviews I’ve looked at are about how easy or hard it was to do: was the path there, was it closed, you know, that sort of stuff. It would be fascinating to know how did it make you feel? How far did it feel? Was that a long way? Was it a short way? These are really simple questions, but people won’t answer ‘It was one hour or two hours’, they’ll answer about how long it felt. That’s the only thing that’s real, how you feel. And it’s a very tenuous, difficult thing to capture.

Daniel [Raven-Ellison, Slow Way’s founder] is a geographer, and I wonder what mindful geography looks like. If Slow Ways stays just about pointing out footpaths… but I think the community is already ahead of that.

The level of engagement, some of the expressions on people’s faces, were not just that they realised, ‘Oh look, I can create a footpath that goes from there to there.’

There’s one particular bloke [captured in a photo] who has gone: ‘Wow!’ And you know that the thought in his head is not, ‘Oh, I’ve found a new way of walking behind Tesco to the middle of whatever.’ There was a deeper connection.

Well, navigation’s not why people are there anyway. I don’t let myself have a navigation app on the motorbike because it spoils the bike ride. I’d rather get lost. I can’t imagine going on a pilgrimage and looking at a map on a screen! Then why the hell am I bothering to do it in the first place?

Ben in The Hourglass 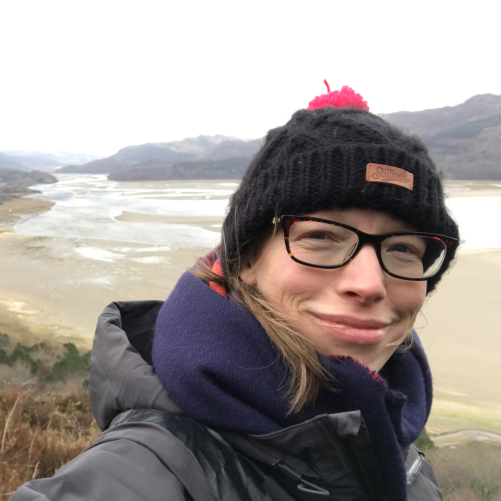